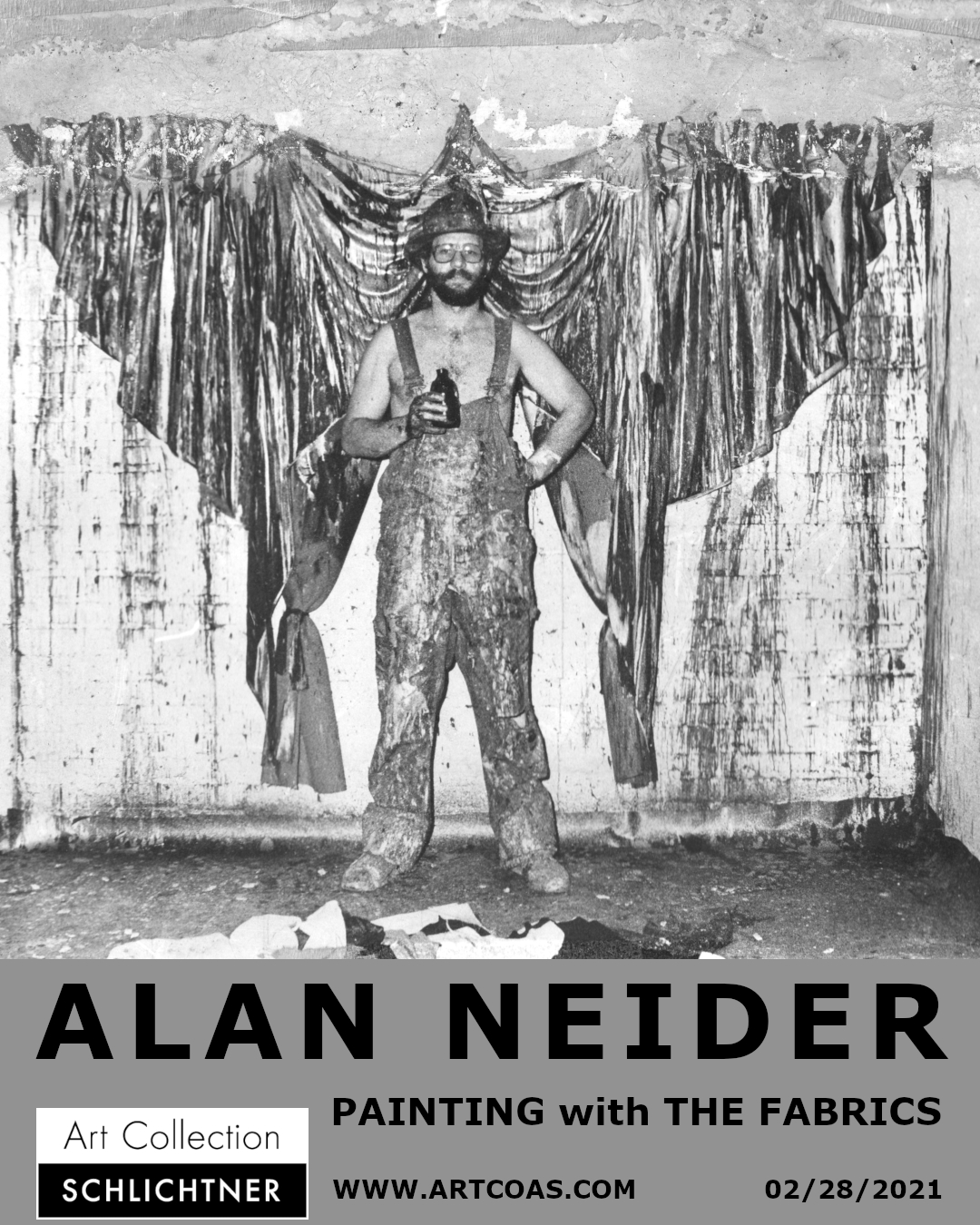 Alan Neider is an American artist who began his career in the 1970s with a Robert Rauschenberg Work Grant and has since dealt with the dissolution of the two-dimensional image surface. Alan Neider describes himself as a painter who tries to let the form, the line and the surface emerge from the pictorial space. This creates haptic paintings that have the character of an object. An important element of his art is the use of objets trouvés as a source of form and color. Ikea bags, items of clothing, bags, and blankets are arranged, draped and sewn in layers on a flexible surface. In a further step, the layers created in this manner are deconstructed through targeted cuts and finally the composition is painted over with different colors, using media such as spray paint or even tar. The results are surprising compositions that seem playful and cool, with an ecstatic use of color that leads the viewer to a euphoric experience.

Alan Neider's fascination and driving force is linked to the development of ideas. That is why he works in series to implement these ideas, but also to continuously develop them. One example is the “Bag Paintings” that he created in 2014 over a period of several months. The pictorial objects measure around 57 x 80 x 10” and consist mainly of arranged and painted bags, items of clothing and cushions. The shapes of the found objects used also determine the shape of the picture surface. They are by no means squeezed into a square or rectangular shape and the artist pleasantly leaves them room and space to exist in all directions. Alan Neider's series usually consist of 5 to 10 object-like images. In each subsequent series old and new ideas are linked together like a chain. In this way, the younger series learns from the older one and accordingly reaches a next higher level. For example, in 2015 the “Bag Paintings” series were followed by the “Blankets” and in 2016 by the “2 Dancers” series in which round shapes were cut from the finished picture revealing the layers below and even the wall behind the painting surface. Angular shapes contrast biomorphic shapes and shadows and, together with the bright colors, generate interest.

In our exhibition we show not only current works by Alan Neider but also works from his earlier periods. In addition to various installations, we find the objects that Alan Neider made in the 1970s from found objects from the basement of his newly occupied house in Chicago particularly interesting: the main components are broken glass, rags, tar, metal and wood. These works were also shown in the Artforum at that time. Just great!

Have fun with the exhibition!

“My Absolute FAVORITE ARTIST is

Sam Giliam (for taking the fabric off the stretchers)

Richard Serra (His Big arcs are beyond words. The Dia Beacon in NY

around and in and out. Words don't come close to describing this ART)

Carroll Dunham (His paintings are SO strong and committed)

Albert Oehlen(He is undeniably a huge influence in the art world. I saw a show of him at the New Museum, not long ago. It was on 2 floors.

Such a profound, important and strong artist.)”