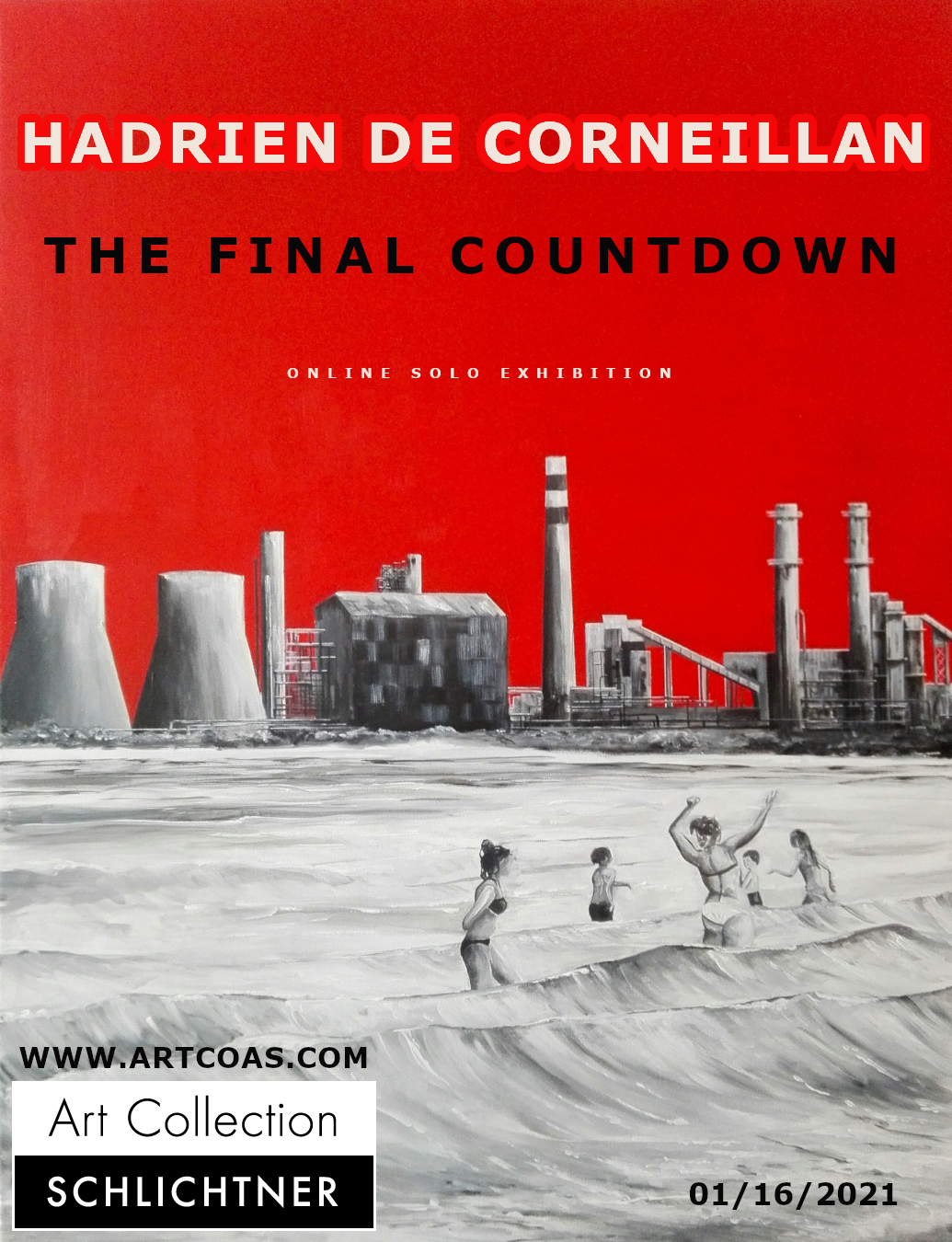 Hadrien de Corneillan lives and works in the south of France, between Nimes and Avignon. In his work the painter contrasts socialization and nature, man and the environment, the future and the past. What sounds so succinct - will be our fate.

It all began as a child. His family filled the house with art. His mother a painter, Hadrien himself initially painted pure nature and romantic painting, and historicism became his model. Everything from the past seemed to serve as a positive connotation for these epochs. A glorification, perhaps, but with reason. Only later did a greater appreciation for the current and then also for the future come. Naturalism turned into mood and effect.

A few years ago, Hadrien had perfected his painting to such an extent that the pictures appeared photorealistically. But a couple of years ago he changed the  colors. From then on, black and white dominated. The end of his romantic phase? His subjects: industrial ruins, dismantled offshore oil rigs and, in front of that, people enjoying their usual leisure activities. Really? The sky above us, the industrially profiled horizon in the distance, around us: unconcern. It's a bit like the Blade Runner, the 1982 Ridley Scott dystopian film noir that depicts a future, apocalyptic world that is both disturbing and beautiful in its imagery. It also has something of a mood lost in reverie, but it is not a dream world, it is not a dream interpretation. With biting realism, the artist takes us out of our individual soap bubble worlds. What now? “I like it” - “Houston, we have a problem” - or “I don't care”? Depending on our mindset and subjective ideology, we will judge and classify this here, whereby religion, prosperity and chance will play a role, generally speaking.

Smoking industrial structures or those that once were, dismantled relics of an industrial era. Here we can see the allusion to romantic motifs: ruins. The destruction has already started here. The forces of nature were already at work. Traces of the past can be seen. Only that the painters of the Romantic period used the ruins to depict something that has decayed, but which recalled a blossoming of something exceptional, something worth striving for, a role model, something sublime, powerful and unifying.

Already Claude Lorrain (1600-1682) began to paint his landscapes more heroically than other painters before him; ruins and the use of light were a means to an end. Giovanni Battista Piranesi (1720-1778) was a master of the monumental depiction of ruins, in doing so he painted partly invented buildings that were filled with glistening light and surrounded by spectacular cloud formations, depicting mood and tension. William Turner (1775-1851) tried to beat Lorrain and won. Thomas Couture (1815-1879) painted “The Romans in the Decadence of the Empire” in 1847 and the people depicted lie in front of the already crumbling backdrop, tired and thoughtful, on the morning after the party. These are the shoulders Hadrien de Corneillan stands on. This is where Hadrien de Corneillan comes in.

But can de Corneillan outbid Turner in using the light? “Decline and fall” - see for yourself. Did de Corneillan watch the clouds for his work “The men who ate the earth” like Luke Howard did at the time? Did de Corneillan study Caspar David Friedrich and his sublime foggy moods? Is it about that? Yes, it is about that and the means of expression in art. Furthermore Hadrien de Corneillan's merit is it, firstly, to establish a connection between the past, present and future and secondly, to question where we see ourselves within these scenarios and what significance this has for us! Which feelings stir in us and which actions do we derive from them? “Will things ever be the same again”?